Spanish conquistadores discovered the mouth of the Rio Grande River in 1519. In the next 100 years, they founded some of the earliest North American settlements along its banks.

These explorers named the river El Río Grande, or ‘the Great River.’ However, it has been called many other names. The Pueblo people called it Posoge, or P’Osoge, ‘big river.’ 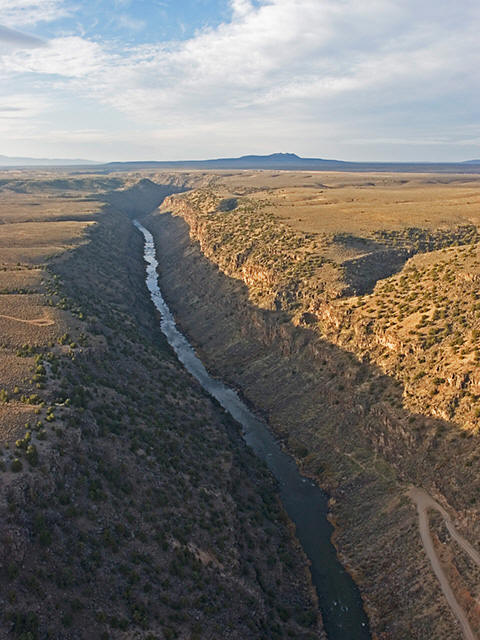 This river of many names, or at least the section that runs through northern New Mexico, is not a typical river that has carved out its own valley. Rather, the valley appeared first and the river followed. This ‘rift valley’ is a separation in the earth’s crust caused by faulting and other earth movements when the North American and Pacific plates scraped against each other some twenty-nine million years ago.

The Rio Grande Rift is not just the canyon, or gorge, that holds the river, but an area of more than 160,000 square miles reaching from central Colorado almost to Big Bend National Park in Texas. Taos Plateau is part of this ‘rift system’ and lies in the San Luis Basin, which is nearly a hundred miles long and about forty-seven miles wide. The San Luis Basin is one of four major basins created by the faulting and volcanic energy. Some scientists believe that several million years from now the Rio Grande Rift may become an ocean. If that should happen, Taos County residents will have both mountain and ocean views!

As pressures from the scraping plates caused the earth’s crust to crinkle, Colorado and New Mexico rose nearly 5,000 feet. Basaltic magma surged upward from the mantle, forcing weaker areas of the surface to spread. All of this faulting and mountain-building activity was accompanied by volcanic eruptions and lava flows. One eruption formed Capulin Mountain National Monument, a cinder cone east of Taos. Fault-enclosed basins called grabens dropped several thousand feet lower than adjacent land. Blocks of the earth’s crust fell into some of these grabens, deepening them. Sediments including sand, gravel, volcanic lava, and ash filled the grabens to depths of four and a half miles in some places.

Meanwhile, the Sangre de Cristo Range rose to the east and the San Juans to the northwest. The Rio Grande, then a stream trickling down from near present-day Leadville, Colorado, flowed into four basins forming a 340-mile-long line between the river’s headwaters and the vicinity of Socorro, New Mexico. Today, the four basins-the Upper Arkansas, San Luis, Española, and Albuquerque Basins-range in length from about 50 to 150 miles, with an average width of 30 miles.

Several of New Mexico’s early pueblos are believed to have experienced earthquakes as the rift continued to develop. Some of the earliest people, the Clovis and the Folsom, may have witnessed volcanic eruptions some ten to twelve thousand years ago. Occasional mild earthquakes continue today along this rift.

The heat from ongoing geologic activity shows up in hot springs along the Rio Grande, including Ojo Caliente, or ‘Hot Eye,’ southwest of Taos. Native Americans enjoyed soaking in these springs, just as do New Mexicans and tourists today. In the nineteenth and twentieth centuries, prospectors and miners flocked to New Mexico attracted by deposits of gold, silver, lead, copper, zinc, and molybdenum that rose from deep in the earth as super-hot, mineral-rich solutions along the Rio Grande Rift.

The Rio Grande is among the longest twenty-five rivers in the world and the fourth or fifth longest in North America. It starts near the Continental Divide in the San Juan Mountains, runs 470 miles through New Mexico to the border of Texas and the Mexican province of Chihuahua, and empties into the Gulf of Mexico. For about 1,250 miles it forms the international boundary between the two countries. The river is between 1,800 and 1,900 miles long overall, depending on how its course changes from year to year.

Some of the best places to view the Rio Grande Rift are:

(1) The Overlook on N.M. Highway 68, about eight miles south of the Ranchos de Taos post office. The view from the pullout is spectacular. From picnic areas on the east side of the road at this point and 1.3 miles further south, you can see the gash in the earth that is the river gorge. The rift narrows and widens within a short distance, creating ‘buckets’ that change color as the sun moves across the sky. You can also see distant mountains in Colorado to the north, the snow-topped Sangre de Cristo Range on the east, and the vast and serene Taos Plateau spread out before you.

(2) The Rio Grande Gorge Bridge. This bridge carries U.S. Highway 64 across the river about thirteen miles northwest of Taos. Sidewalks with observation platforms at mid-span allow visitors to gaze down at the narrow ribbon, 650 feet below. A large picnic area on the southwest side of the highway leads to a hiking trail along the river’s west rim.

(3) The Wild Rivers Recreation Area about thirty-five miles north of Taos. Head north on Highway 522 and take Highway 378 about three miles north of Questa. Here, the Red River flows into the Rio Grande at La Junta Point. There are developed campgrounds and a number of hiking trails, including some that descend hundreds of feet to the Rio Grande. Call the U.S. Bureau of Land Management’s Taos Field Office, (505) 758-8851, for further information.