Finally arriving at a large adobe and wooden arched gate, with the words, Our Lady of Guadalupe Monastery: Monasterio de Nuestra Senora Santa Maria de Guadalupe next to a small niche’ shrine containing a statue of her, we were in awe. 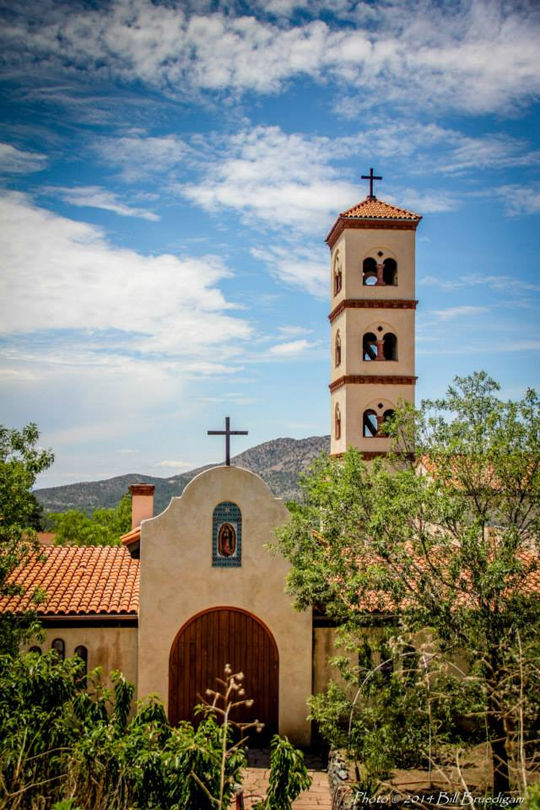 The driveway up to the monastery was lined with the full purple blooms of Spanish sage causing an explosion of color. The silence that echoed through the mountaintops was engulfing. There were no sounds to be heard other than the quiet, whisper of peace.

We parked and got out of the car to an amazing view of the top of the Gila Mountains that went on to the horizon and beyond. We wandered around for a bit as there was no one about.

The sanctuary doors were open so I went in and sat for a bit, my first time in Catholic Church other than a funeral thirty-five years ago and a quick jaunt into St. Francis Cathedral in Santa Fe. I sat rather in awe of the peace and the altar, flanked on one side by Our Lady of Guadalupe and on the other by St. Joan of Arc (as I will mention later, this particular group of Benedictines originated in France in the eighteen hundreds). A wrought iron partition was between the seating area and the rest of the sanctuary.

Eventually, I wandered back out to join the others. My husband had been photographing the grounds and had returned so we decided to knock on the large double, beautifully crafted doors, made at the monastery by the monks.

After the second attempt, one of the large doors creaked open and we were greeted by a very bright-eyed young man. His smile was kind as he welcomed us. I asked for brother Bernard as I had been instructed to do on the phone and he replied that he would go and get him. Moments later, Brother Bernard appeared and introduced himself.

He spent a long time visiting with us in the large open-air adobe foyer, patiently explaining the history of the Benedictines, the Monastery, monastic life, their mission, rules and so on. He was a jolly man, very happy, very friendly and very talkative which maybe he is glad to greet visitors for as he explained they spend most of their day in silence using only hand signals.

Conversation is reserved for communal leisure time only at certain times of the day. He originally hailed from the northeast and shared his journey as a wrestler, then an architect which though he had wanted to become, did not find fulfilling. He began talking with a priest who had encouraged him in the Benedictine direction and that had been twenty-one years before.

In asking how they came to select the name, he answered that it seemed fitting, though their particular community has French origins, they felt it would honor the people and the Virgin here in the southwest who are much influenced by Our Lady of Guadalupe of Mexico. Otherwise, the role of Mary is pretty much the traditional role but her influence and likeness were all around.

There had been a small statue of her standing about two or three feet high at the entrance to the foyer. She wore a strand of glass turquoise-colored beads. I touched her head as I passed, later learning that my husband did the same thing. St. Joan of Arc is also honored here due to the French origins as mentioned above.

After our conversation with Brother Bernard, he invited us to stay for afternoon prayer, which we did. We sat in the front portion of the sanctuary as the monks entered from the upper end. There were about thirty of them living at the monastery. They filed in for the afternoon prayer which was chanted and sung in ancient Latin hymns. I mostly just closed my eyes to listen, letting the magic of the chants work on its own.

The feeling was of utmost peace and I could feel the presence of the holy spirit all around me within the cathedral and winding its way through me as well. It was one of the most peaceful experiences I have ever felt. For a moment, I felt the breeze lightly caress my back as if to say, turn around, and when I did, I was amazed at the beauty of the view surrounding me as the ancient chants almost transported me back in time to another place, another cathedral somewhere far, far away.

A young local boy of about eighteen came in wearing his work clothes and knelt at the kneeling board during the prayers. He was an obviously very devout young man to have made the drive for afternoon prayers.

After the prayers, the rest of us went on up to the bookstore gift shop where we intended to purchase the coffee which is imported then roasted by the monks. The grounds were busy with monks returning to their domestic duties after the prayer session. Some were hauling things with trucks, one was driving a small bulldozer type thing, others were doing various other jobs.

In the gift shop were all sorts of crucifixes, medals, posters, literature, and shelves of books all pertaining to the Catholic faith. We purchased our coffee beans and I selected two medallions; one of Mary and one of St. Benedict which I wanted because in one hand he holds a cup and in the other a raven. I had read the story that while running a monastery where he didn’t particularly fit in (before he established his own) the others had attempted to poison him twice.

The first time his drink was poisoned, which he said a blessing over and the cup shattered. The second time in his bread which when he said a blessing over, a raven flew in and took the bread and flew away with it, so those are his emblems. I have been fascinated with the raven for decades and is especially abundant here in Silver City near the monastery.

The young man at the counter who waited on us had the brightest, clearest blue eyes I have ever seen. The love, peace, and immersion he experiences in his faith and lifestyle were truly evident in his eyes. He informed me that I would need to wait on the Father Priest who would come to bless my medallions. We waited a while, visiting with him. He had come from Wisconsin and had been at the monastery five years.

There were three other women there also visiting who all had a very peaceful, almost Amish feel about them, all very polite, graceful and beautifully Spanish. Two were young, one was maybe I suspected their grandmother. One had left her car keys in the ladies room which I found and returned to her. We all visited the small store as if we were old acquaintances.

In the meantime, my husband had opted for a photo walk while the rest of us had driven up to the gift shop. On the way, he ran into Brother Bernard who asked him if he would like to go into the cloister, the monastery. He said yes and was given a private tour of their quarters and living area.

The monastery also housed two large and beautiful German Shepherd dogs, a male and a female; Caesar Augustus and Abbey. Abbey had been with us the whole time during our visit with Brother Bernard. Caesar had joined us afterward as the large doors to the cloister had opened for prayer time.

Out he came, with his partially deflated basketball. The dogs were quite a couple. I had already been thinking, Abbey the Monastery Dog, a great title for a children’s book. My husband had also seen their dog beds as part of his inner tour. Even monastic dogs it seems, have their beds and balls.

He was also shown the private alters where they pray, the gardens, the fountains where they wash before prayer, and a special prayer book that was old and bound with string and contained a copy of a page from Benedict’s original rules written in 529 A.D. when he first founded the first Benedictine monastery.

We suspected that had I been with my husband, being a woman, that my husband would not have been invited to tour the all-male living quarters. Apparently, Brother Bernard took to my husband for when they returned to the shop, Bernard went straight to the bookshelves and picked out two books as gifts to my husband. Hey, I am the researcher here and the book-head here, but he got the books, presented to him as a most special gift.

The view was breathtaking and the visit full of peace and bright-eyed monks who happily shared all they had. The monks are working towards a completely self-sustainable environment. They are very close, only relying upon the purchase of items they cannot grow like grain. The sale of coffee and religious books and gifts items helps them to maintain their lifestyle.

If you visit the grounds, please be respectful and remember that this is not only their home but their place of worship. The cloister and inner rooms are not open for visitors but the rest of the grounds and sanctuary are so beautiful that you will not be disappointed.

Visitation is encouraged and Mass is held daily.